Review: The The Products and Practices of CBC Industries, Inc.

On July 4th, 2016, I ordered an AR 15 upper receiver from CBC Industries for their 4th of July sale. The upper receiver was well packaged and came with a packing slip indicating its quality inspection.

In accordance with NJ state law, the moment it arrived on the 22nd, I had a compensator pinned and welded at an expense of $73. It was there, the gunsmith made me aware of the manufacturing mistakes made on the upper. The side of the handguard has over-milled and the assembler had taken divots out of the upper receiver clumsily installing the forward assist retainer pin (see pictures). These are not things that occur because of mishandling, these are issues that occur in in manufacturing. The over-milling on the handguard could only have happened before the part was anodized at the factory (as the issue was anodized as well). The damage around the pin hole generally occurs during assembly (done by CBC Industries), when the assembler does not use the correct type of pin punch when putting in the pin. The denting is caused by the incorrect pin punch sliding off the top of the pin when its being struck with the hammer (by the assembler at CBC Industries). 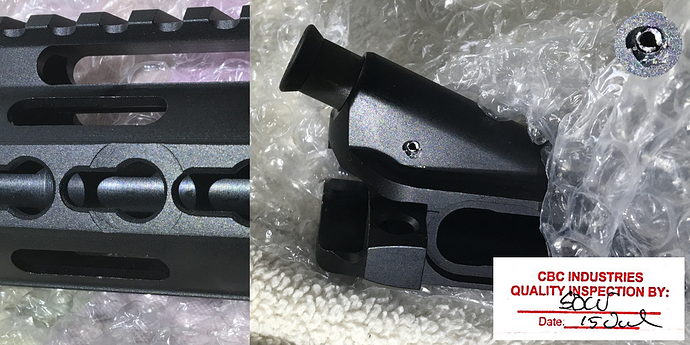 I first attempted to contact CBC Industries on July 22nd (the day it arrived) with a copy of the first picture and the following text:

Was the rail that came on this upper supposed to be a blem or did it get past quality control? See attached.

This message was ignored completely. I then sent a second email from a military email address:

This is my second email in regard to order number 15650. I have issues with both the quality as well as the workmanship of the lower I received last Friday (see attached pictures). If this is not the correct department to contact, please send me the contact information for the correct one.

In response to the email I send from my military address, I received the following:

The only point at which I received any real engagement with CBC Industries was when I voiced my concerns publicly on their Facebook page, where they made it clear that they were not willing to fix the issues with my upper, and that my only course of action with them was to send it back for a full refund (after I invested $73 in compliance work) because, as they put it, they could “sell it via scratch and dent for $239 and my customers would be in a line at that price” (exact words).

I’ve written this page so that anyone who does business with CBC Industries knows what kind of company they are dealing with. It is my opinion, as the part had passed their internal quality inspection, they have no problem trying to pawn off their defective parts during sales on unsuspecting customers (and customers they think will be unwilling or unable to complain), without disclosing them as defective or blemished. And in my case, they are not willing to stand by these products.

Based on my experiences with CBC industries, I recommend that people avoid this company.

I appreciate you posting this. I hope this is an isolated incident. With that being said, even if it is, it’s not acceptable. Period. It seems that some companies only respond when you put them out on a public forum. What a damn shame. Best of luck man.

In buidling my first AR CBC was definitely a company I saw some GREAT deals from. But in reading reviews on a LOT of different community sites the rate of horror stories was really really high. Like, with every company that has pretty solid deals i’ve been checking around to hear buyer stories, and it doesn’t matter which company it is, there can be screw ups. Even high end companies can occasionally let a rifle slip through QA cracks, or someone just doesn’t notice something. It happens.

The difference is that for the most part you can spot companies that deal with their screw ups very seriously and professionally and ones that don’t. A lot of the horror stories i’ve heard with CBC have had similar responses where the customer either never gets a response at all or it takes ages to get one and then it’s a challenge to fix the problem if they offer to fix it at all.

At least the worst you can get with other budget assembly companies like say 22modsforall is just a poorly assembled rifle. They still source parts from known manufacturers at wholesale prices then resell them as basically an AR assembly company. When you have issues with QA on both the raw parts and the assembled product AND you have poor customer service, that’s a recipe for buying a budget upper, spending money to correct the problem then still having a very sub-par upper.

They handled my situation very well, and quickly.

Recently I got an email stating they have grown unexpectedly larger faster than they had anticipated, and have hired more people to compensate. Said they are actually going to have a dedicated customer service rep, assuming that means the person that deals with sh!t when it happens.

Hopefully they get all the wrinkles ironed out, as I had issues once in the several orders and they quickly resolved that issue.

Problems will occur, its what the company does after that is most important!

CBC Industries is now part of the forum, if any of you have any questions they are here to help!

Though I appreciate your interest, I believe they’re here for damage control. If they wanted to help, they have my phone number, email and street address.

Definitely understand your concern, but I personally think it’s a benefit to have every vendor possible here. Just my opinion though.

Mr. Blonski, we, CBC Industries, are truly sorry that you had a bad experience with your first order. Your order was placed and handled prior to my hiring so I am not able to speak in defense or condemnation of the actions of the people you dealt with. I can assure you that I work very hard to ensure all of our customers’ concerns and issues are handled in a professional and prompt manner. I can say that we now offer pinned and welded upper assemblies for customers who’s state requires this modification. The reason that they stated that they were limited in their recourse though, may be due to the fact that you had taken it to a gunsmith who was not CBC certified prior to contacting us. CBC Industries welcomes all comments concerns and questions regarding placed orders, potential orders, and technical support for operation issues.

Good Evening. I’m glad CBC Industries is doing what they can to improve their customer service, and hopefully, their quality control as well. CBC Industries was made aware of my need to perform the modifications prior to their shipping me my upper receiver, as I originally tried to contract them to perform them. The only option CBC gave me was to return the upper receiver, for which I paid $219, buy it back for about $300, then pay an extra $60 for the pin and weld. I still have the email chain if you’d like to see it. I don’t agree that CBC was limited in their recourse for the reason you stated, but rather because, prior to your hiring, they placed making a little more money over the satisfaction of their customers and their professional reputation.

I agree with Mr. Blonski, CBC is just trying to do damage control. The new Customer Service Rep. most certainly could have reviewed whatever was said or written from his order before contacting Mr. Blonski. Mr. Blonski even offered to send him the email chain from his experience but it was not even mentioned by the CBC Rep.

I think it is important to have value added Vendors on this site that truly make a good faith effort to resolve problems as they occur. When your first hired as a Customer Service Manager in any industry, your not absolved of problems that occurred prior to you being hired. You are expected to review whatever the company has documented and speak to the customer and make a good faith effort to resolve their issues. In 30 + Years as a Customer Service Manager, all the training tells you that if any doubt exist and the company didn’t completely document the issue that the base goes to the customer. The next avenue the Customer has is to take the business to Small Claims Court. The Business will lose every time when they have failed to protect themselves by documenting every single thing. By not responding to the customer who is obviously got an issue with the Company and their products and has photos to prove his allegations is just icing on the cake for his case in court. The Rep for CBC in my opinion made a horrible attempt to resolve the issue by stating it was before I was hired and made it sound to me like there was nothing he could do. I won’t be purchasing anything from CBC based on his response alone.